Here it is again—April—autism awareness month and ironically, the same month my autistic son was born in. It has been five years since we started receiving therapies for behavioral, cognitive, speech, and social delays (four years and two months since his “official” medical diagnosis of autism).
I always think in fractions, and if I live as long as the average American female (I added a couple extra years due to the 1/4 Chinese blood in me) of 83, and assuming my autistic son is alive that whole time too, I have already completed almost 1/9 of this mortal journey dealing with autism firsthand. I recently read about a crazy race, which consistently changes its course and mileage, is hard to get in, has quite a number of dangers involved, which may require any number of skills to complete, and is so challenging that only about 60 people have completed it since its inception in 1986– the Barkley Marathon. https://www.google.com/amp/s/amp.businessinsider.com/hardest-endurance-races-in-the-world-2017-11

This race’s description sounds like my description of dealing with autism. I honestly feel like I have few concrete answers and I am turning over rocks, to find clues, all the time. But unlike the Barkley Marathon, which you have the choice of signing up to participate, I was not given a choice and thrown into the autism race, stumbling and confused. Finishing the race, I guess, would mean finding a complete cure, but like most families handling autism, we continue along, in it not to win it, but in it because you don’t quit your kids. 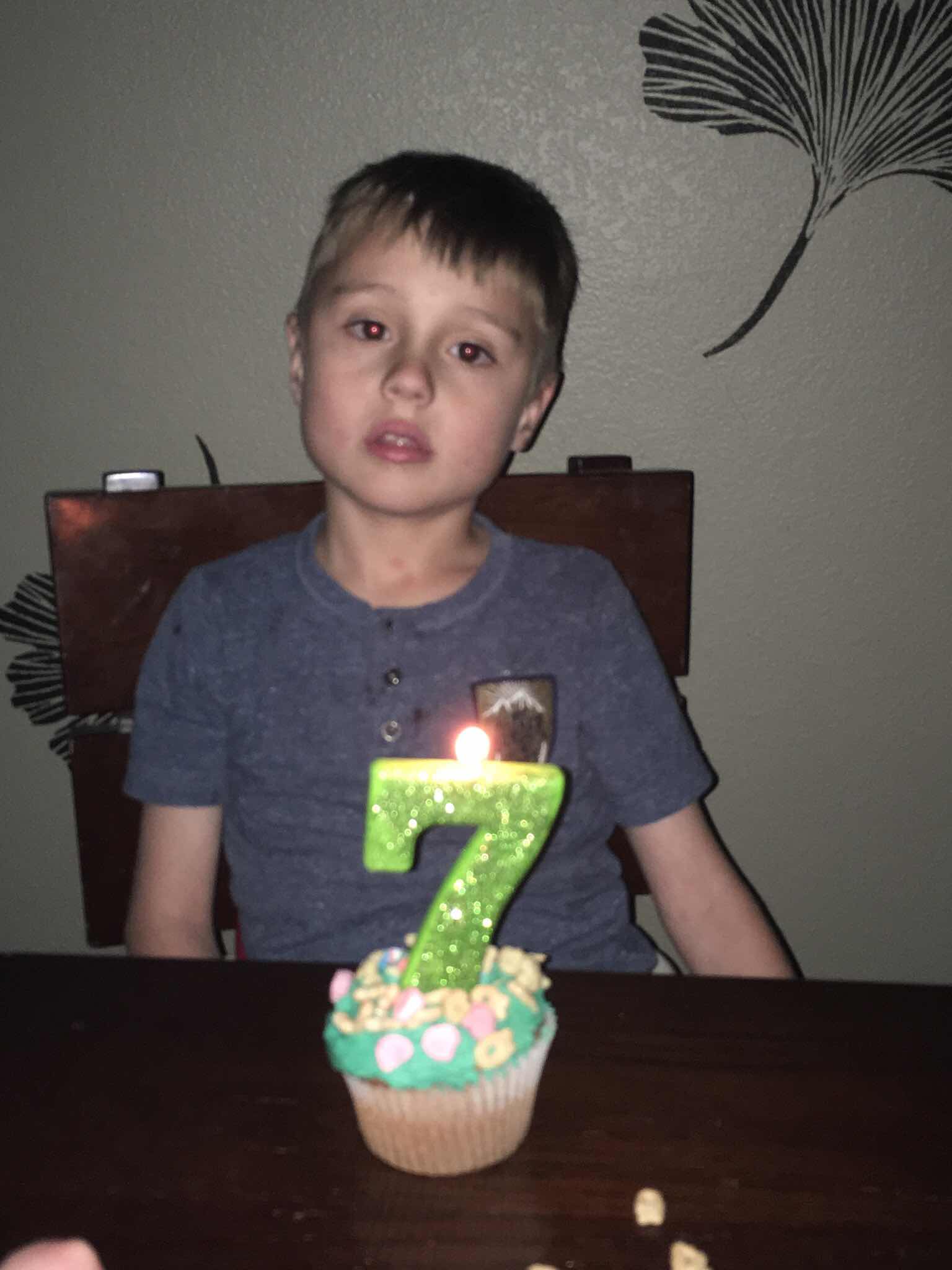 (He was super-thrilled on his birthday, as you can see 🤣).
In the last five years, I have been constantly upping my game, the obstacles keep coming. I have yet to face the impending challenges of when my child surpasses me in size and stature and whom to burden with his care when I am too old and worn out, also possibly the onset of adolescent seizures, which occurs in half the autism population. I don’t ever intend to come across as a pessimist, but speaking realistically— an object in motion tends to remain in motion, rarely just randomly changing trajectory. Kind of starting to see our trajectory. Oh trust me, I’m always reading and trying new things, but not at the expense of just doing things for the heck of it, always researched. (Come on—I’ve got 5 other kids to care for!) Trust me, there is no easy way!
So, where are we right now? Let me tell you of a typical day in my household:
#5 usually wakes up between 6 and 7am, most often because his older brothers do not know how to be quiet as they’re getting ready for school, at least not by my standards. He immediately, as of the past few weeks, tears his curtains down. Fortunately, they are on drapery clips instead of hung directly on the rod. This is the current challenge I am dealing with, enough so that I want to get an outside shade that I can control by remote control so that I am in charge over when the daylight comes in and not him.
Almost immediately he wishes to eat breakfast, which quickly escalates to crying and yelling if not fed immediately. Don’t know if this is because of a growth spurt or if it is because of one of the supplements that I have started to give him (that is supposed to “help” but I’ve heard also increases appetite drastically.) Or, maybe it is because he is having to take seasonal allergy medication and wakes up a little off. I have no idea, count your blessings if your kid can tell you what’s bothering him!
Once fed he is pleasant and happy, which fortunately for us, is his usual state. 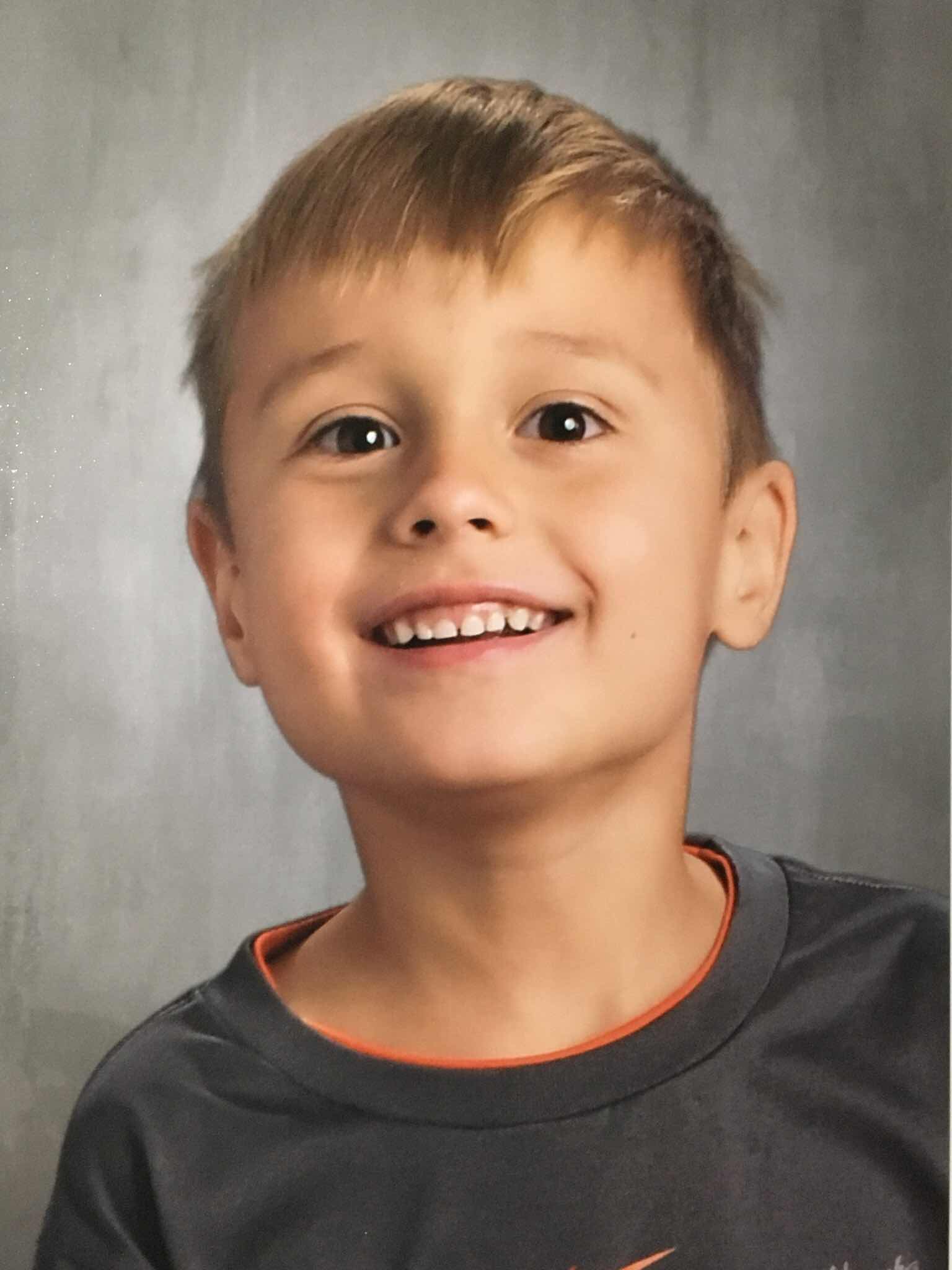 (Don’t know how the school photographer captured this one-in-a-million pose, but give that man a raise!)

Six out of seven days of the week we have to go somewhere in the morning before 9 AM, usually to school, Sundays to church. This requires fixing a chewy to his collar so that he will hopefully not chew other things. For the last year I have only been buying button-up shirts or polos. This is so I can click a chewy through the top button hole. If not through a buttonhole and simply clipped onto his clothes, he yanks them off and we lose chewies. Not good for anyone.
We also don’t leave home now without him wearing a GPS tracker belt. This is due to the fact that my happy boy is also a happy wanderer and happily wandered out the front door when it was discovered unlocked one day. This led to the worst 45 minutes of my entire life as I had to rush back from the store and send all my older children on the errand of finding their lost little brother (who didn’t know he was lost, even a little). It was I who discovered him, naked, only a quarter of a mile away, while I was on the phone giving a description to 911 after having heckled all neighbors that I passed while driving around screaming like a crazy person. Most parents don’t have to worry about stuff like this!!!
We don’t leave home without his iPad mini, which contains a $300 app, fully customizable for speech. Of course, the trouble with autism, is understanding the importance of communication. So he is still learning basics, how to ask for food. One day I hope he’ll ask me to change his pull-up or tell me his head hurts. One can only hope.
Safety is always an issue with this guy, every bedroom and bathroom is locked to keep him out of everything, including potential drowning in bathtubs. My family and I are acquiring excellent bladder control, because rushing to the bathroom includes having to pick the lock before you can get in to go. It is a luxury for my youngest to get to play in her bedroom; it’s almost always locked to keep big bro from literally tearing the room apart :-(.
Little guy has me employed now, by IHSS, to be his provider. He requires eyes on him at all times to ensure he is not climbing on the wrong side of the stair banisters or landings (scary!!!!) or standing on chairs/desks/tables or climbing shelves.
Another daily joy is feeding him. Picky eating is an understatement. Couple this with trying “helpful” supplements and diet changes in order to see if anything improves in his abilities to communicate as well as lessen the constant stemming—I’m a full-time dietitian with one of the hardest clients in the world. You should see the almost-wrestling matches that ensue daily when I hold him down to give him supplements and allergy medication. My husband has yet to give this bull a ride.
You already noted the mentioning of pull-ups. Yup, still not toilet trained. 3 attempts last year. I’m still not giving up on this, at least getting him time-trained. But right now, I just don’t have the stamina. Maybe we’ll attempt again over the summer. Til then, he doesn’t seem bothered by soiled pants—indeed a blessing and a curse at the same time.
The biggest of mansions in heaven to his teachers, aides, and therapists. They say it takes a village to raise a child; with autism—it takes a village to keep a parent from giving up on raising a child.
By evening time he goes down to bed okay. Often roaming around in his locked and dark bedroom. No lights of any kind allowed, practically no toys either—otherwise he stems all night flapping them. And now—curtain yanking. But at least he isn’t flipping the mattress out of the frame anymore—thanks to my hubby strapping it down.
We still get occasional night-wakings. Some times we wake to giggles and “singing,” every now and then—thrashing and screaming :-(. It’s these early, unexplained wakenings, or when he is ill, that I really think I can’t go on. But I can’t just quit. I would die without the tag-teaming from my husband and our four eldest children. They didn’t ask for this major detour in life either and I am eternally grateful for them and their support.
This is autism. When he was first diagnosed I hoped for speech. I hoped for being mainstreamed in to regular school with an aide. I hoped for independent adult living. I still hope, but I also must accept reality. I’m not giving up or giving in: I’m just giving. For the rest of my life.
Posted by SuburbiaMom at 5:47 PM 3 comments: