FOOD!!!
We stayed in seven different hotels during our trip with breakfast and dinner buffets almost every day! (Lunches were more local fare eaten with the locals). All locations had an abundance of tomatoes and cucumbers so while I did my best to try everything (hard to do at buffets!!) I did manage to not gain any weight on our trip and I think all the tomatoes and cucumbers helped).
Honestly, I can say that I liked Arabic food better than Israeli food. Here are some of my favorites, as well as some unique things we ate too: 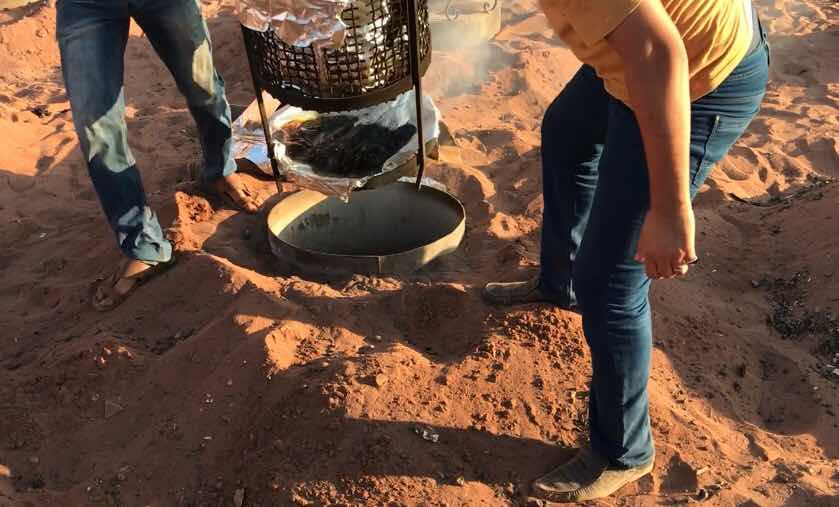 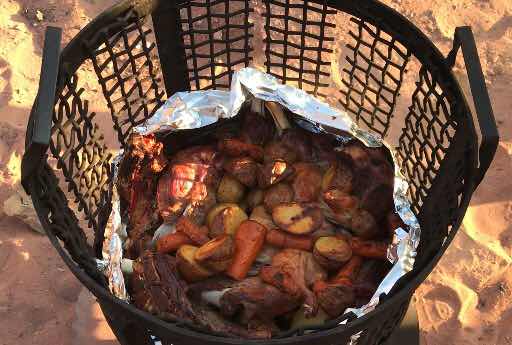 Zarb, Bedouin desert cooking—kinda like a Dutch oven thing—deep in the sand. Best lamb ever!!!! (And potatoes and carrots!) 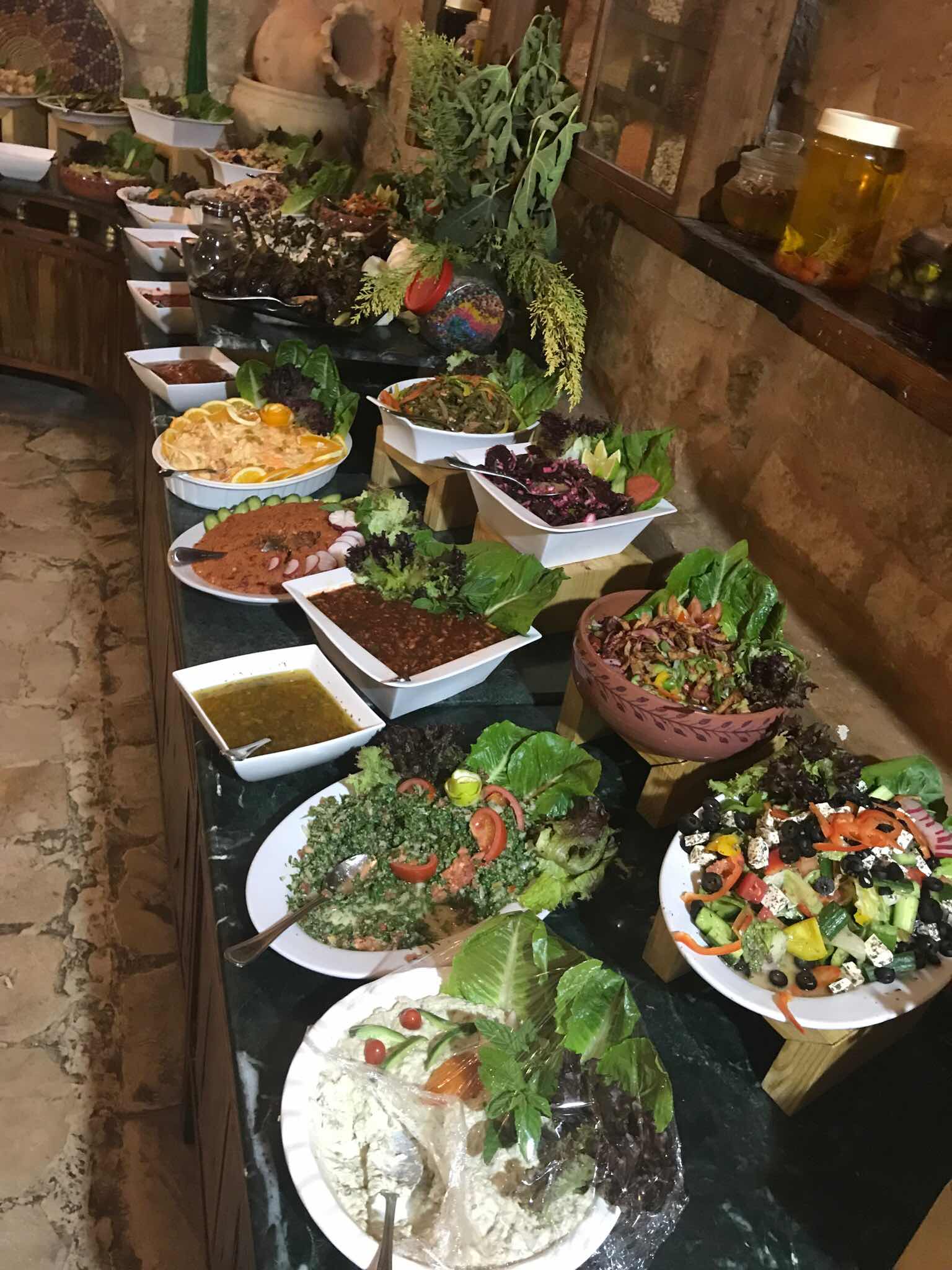 Most of our hotels had amazing food!!!! In this photo, the nearest dish is THE BEST HUMMUS ever! Don’t know if I can ever eat hummus from around here again—the Jordanians know how to make hummus!!! 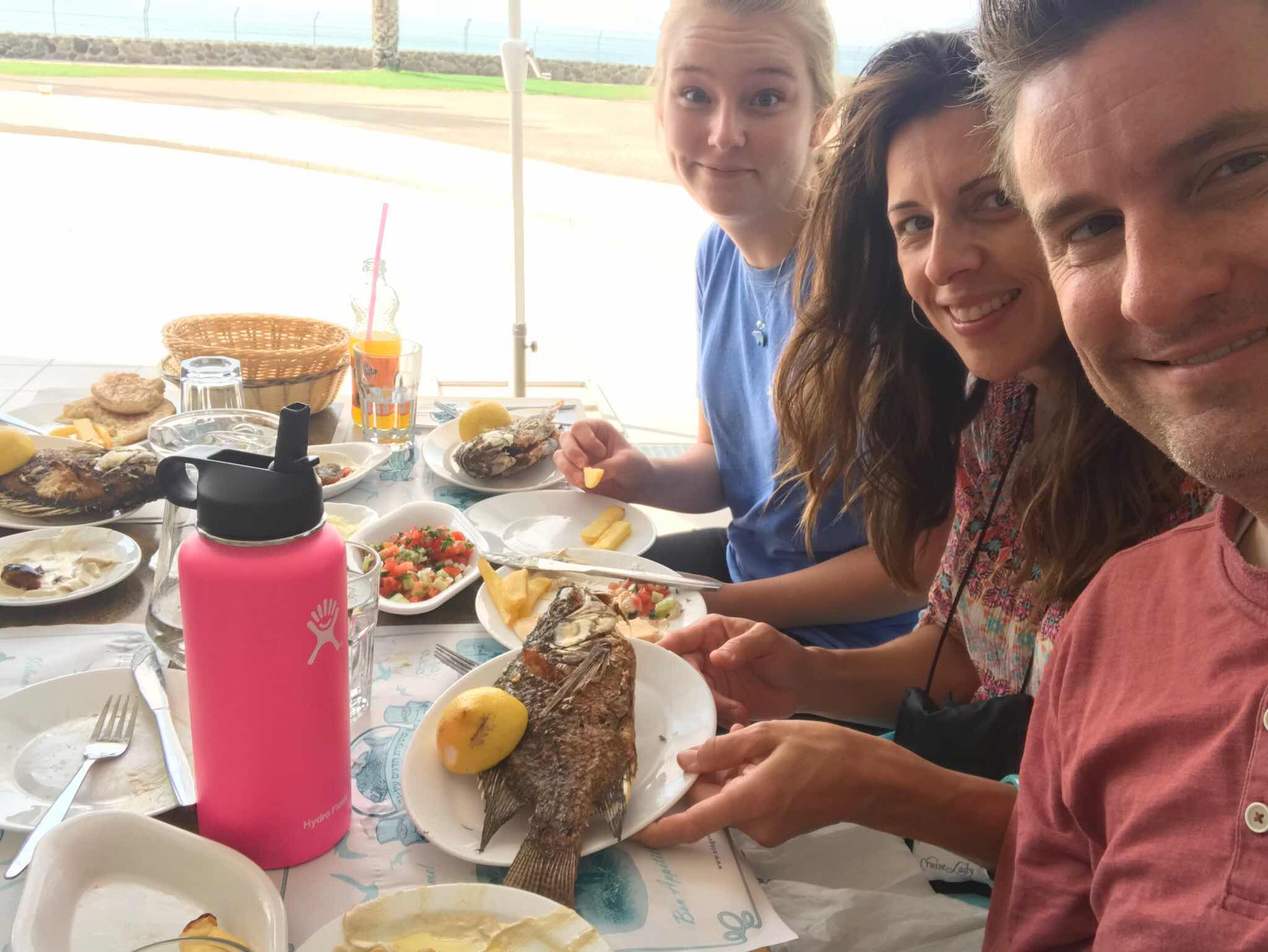 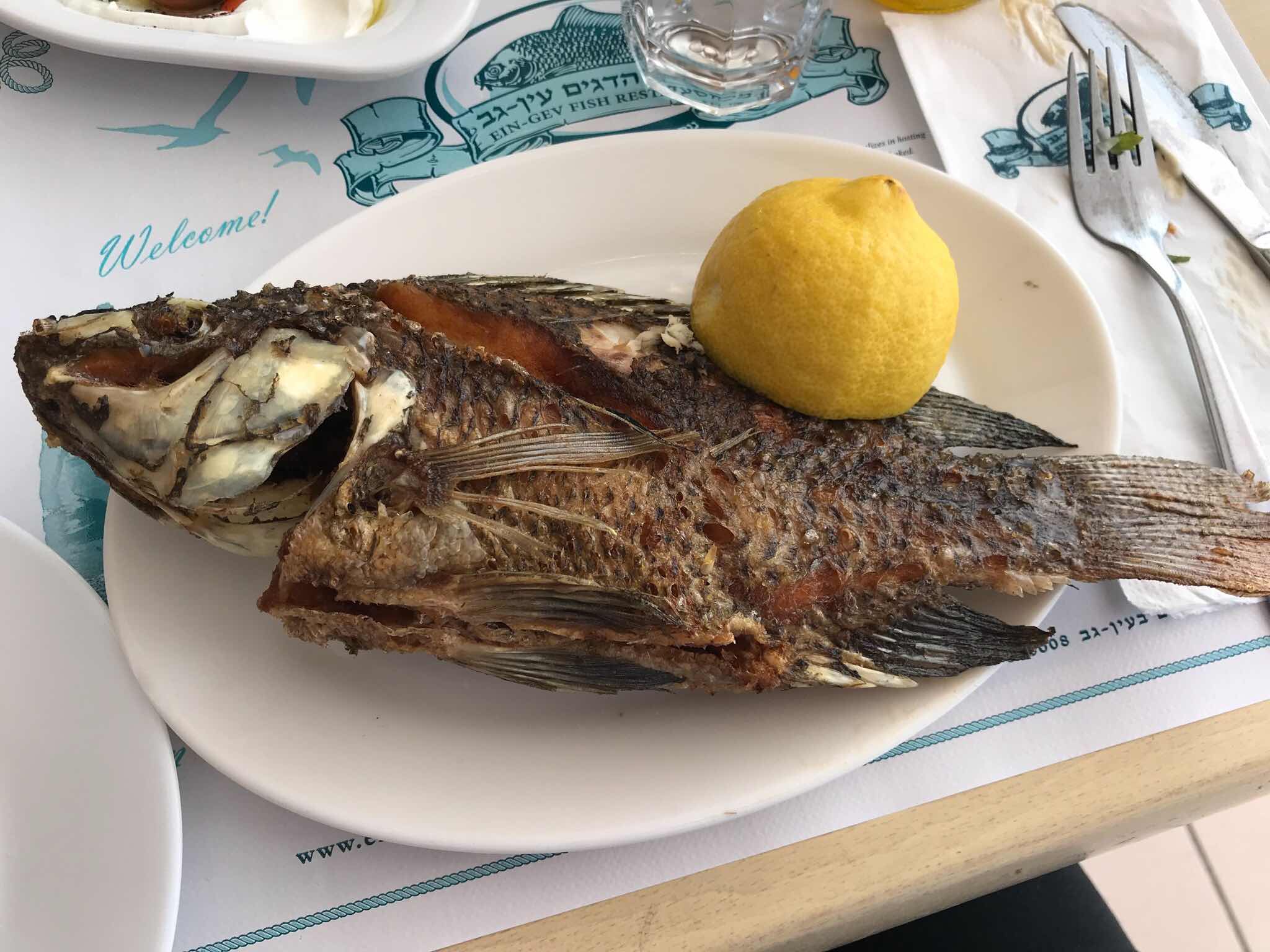 St. Peter’s fish—ugly thing, but delicious. (We found out it’s tilapia). It was interesting eating it, I felt like I was back in 10th grade dissecting things in biology class... 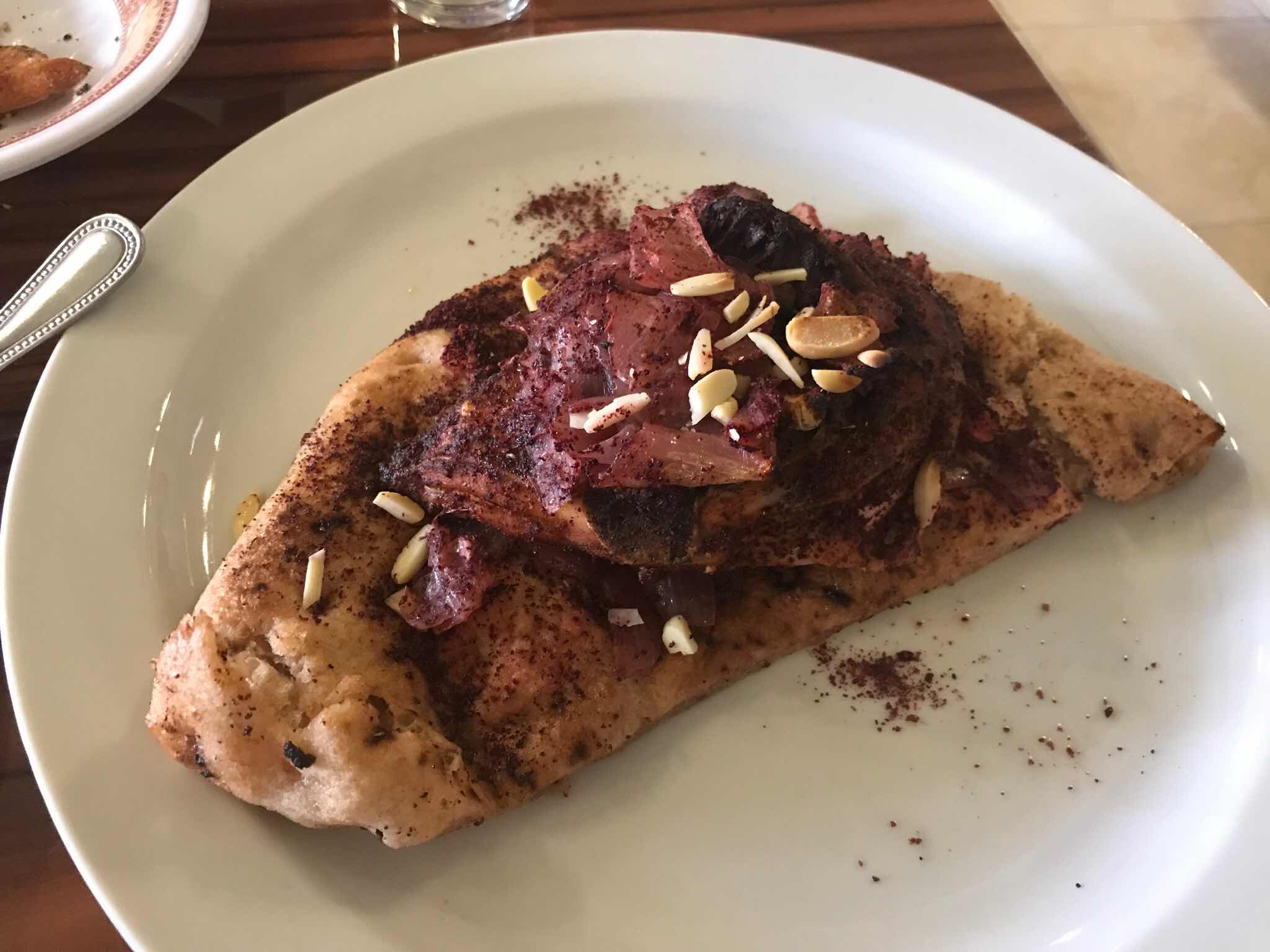 This is some darn good Musakham. Basically a delicious barbecued chicken with grilled garlic, onions and the secret—a beautiful and delicious purple spice called sumac. 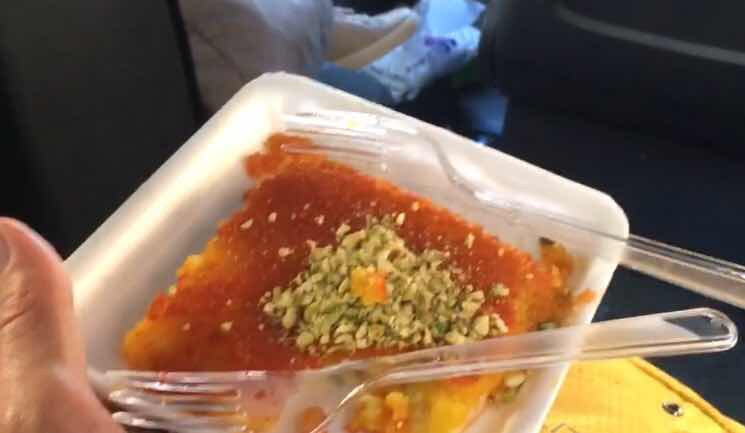 Kanapa—a dessert made of goat cheese. It was very rich, slightly sweet and savory. Not quite as sweet as I like my desserts but still interesting. And the best part behind this dish is the story: it was given to us from a local cab driver, Abe, that we were driving with on our last day. He pulled over at some beat up restaurant and said he had to take care of something, got out, left the car running, and ran in. We were wondering what in the world was going on?! He came out with kanapa for all of us. I made sure he took a bite before I took one, just to make sure it was safe to eat ;-).
Two other things worth mentioning—Tabul—a delicious flatbread that was cooked by pounding and tossing the dough thin (like you do with pizza crust) and then it was smacked up against the inside of the clay oven where it stuck to the wall and cooked! Fascinating and yummy! Wish I’d gotten a picture or video of it now!!!

And lastly—has some of the best baklava ever on this trip!!!!!! Yum!!!
“Pinch Myself” Moments 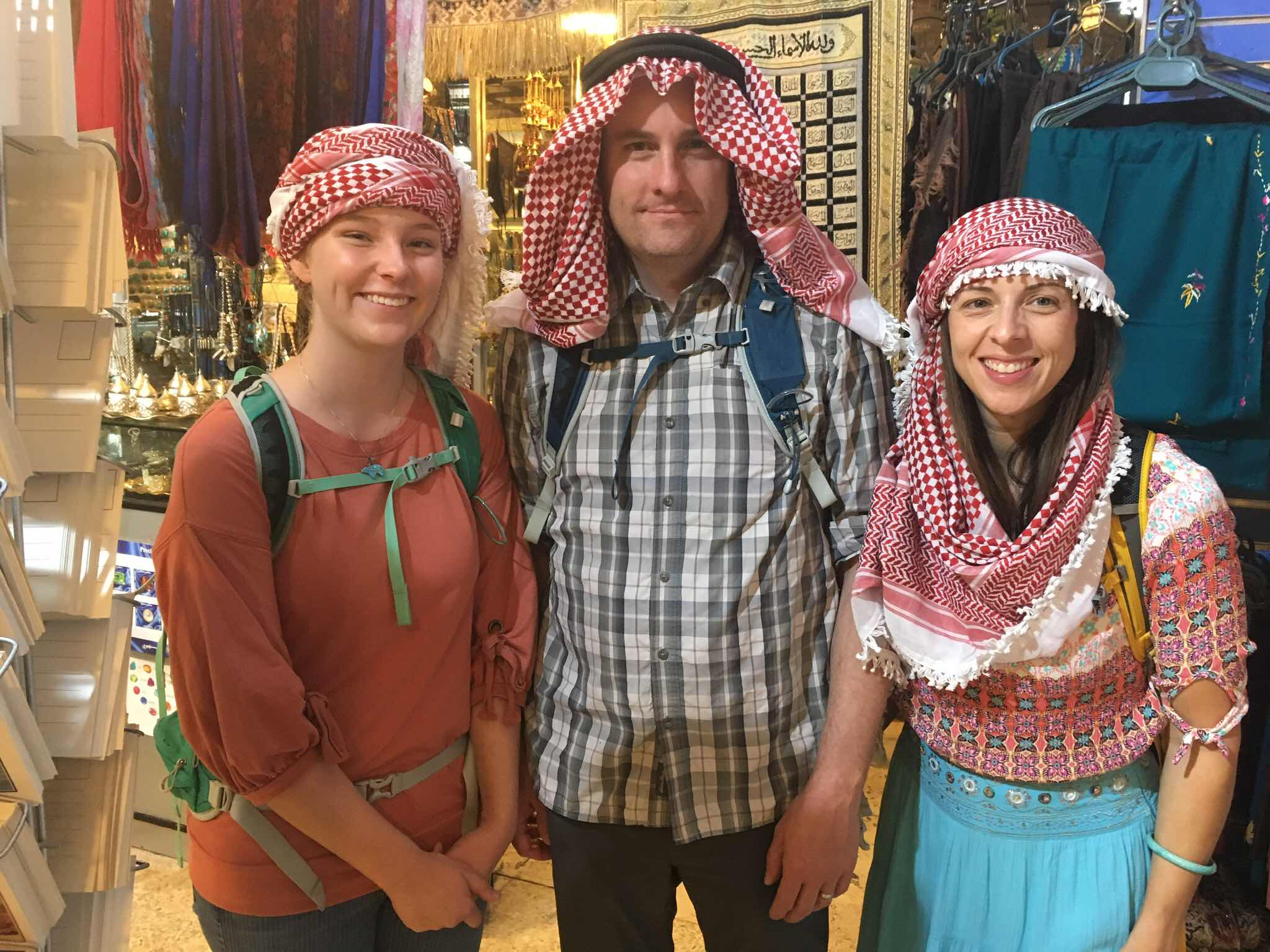 Farah, a lovely Muslim gal explained all the traditional head scarves color significances, as well as the traditional ways of wearing them. We went for the scarves associated with Jordan civilians and royalty. 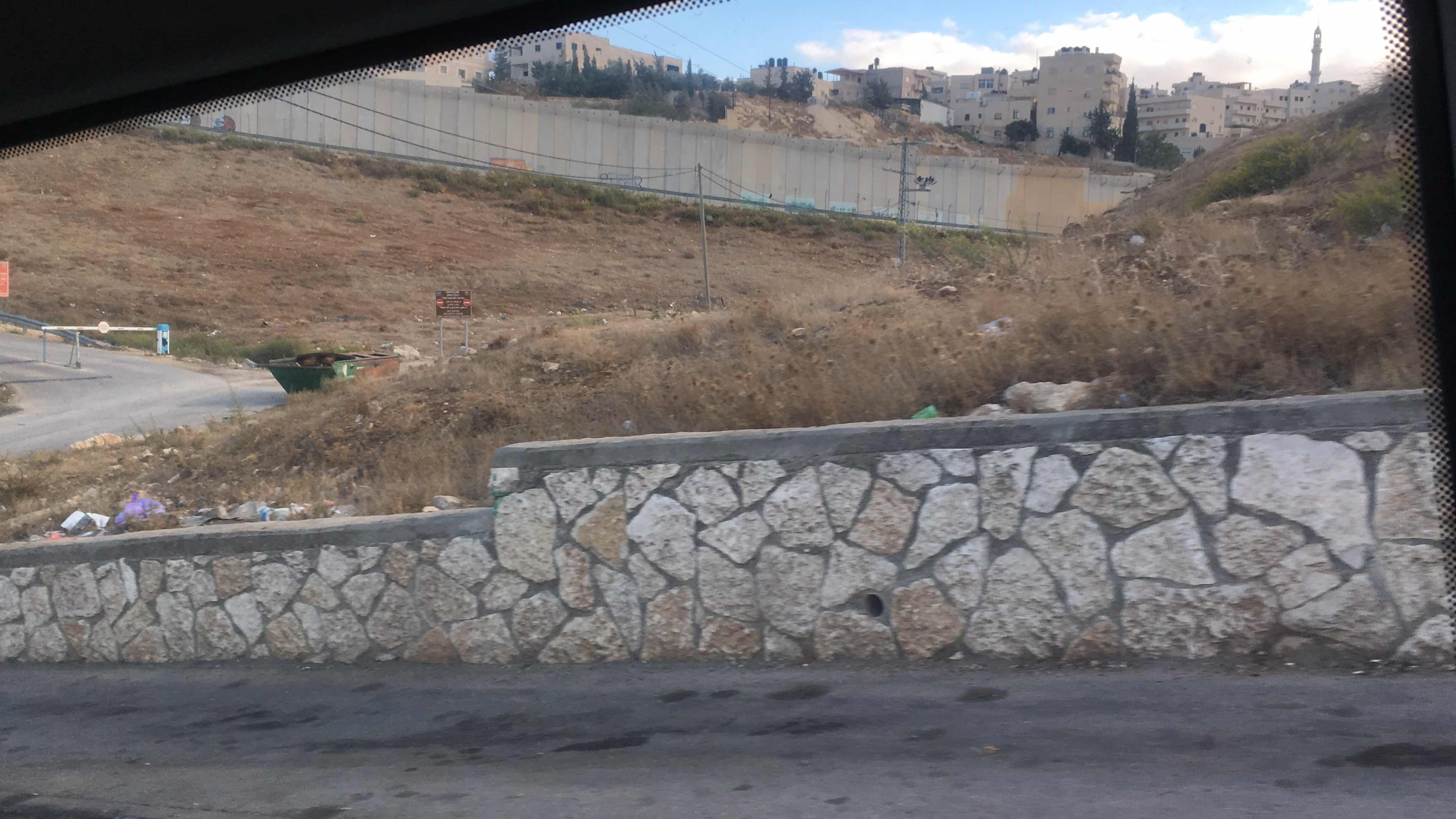 Palestine West Bank cities—and the Israeli walls put up all around them...I’m not sharing my political opinion on all that I saw and learned, but it was unbelievable. 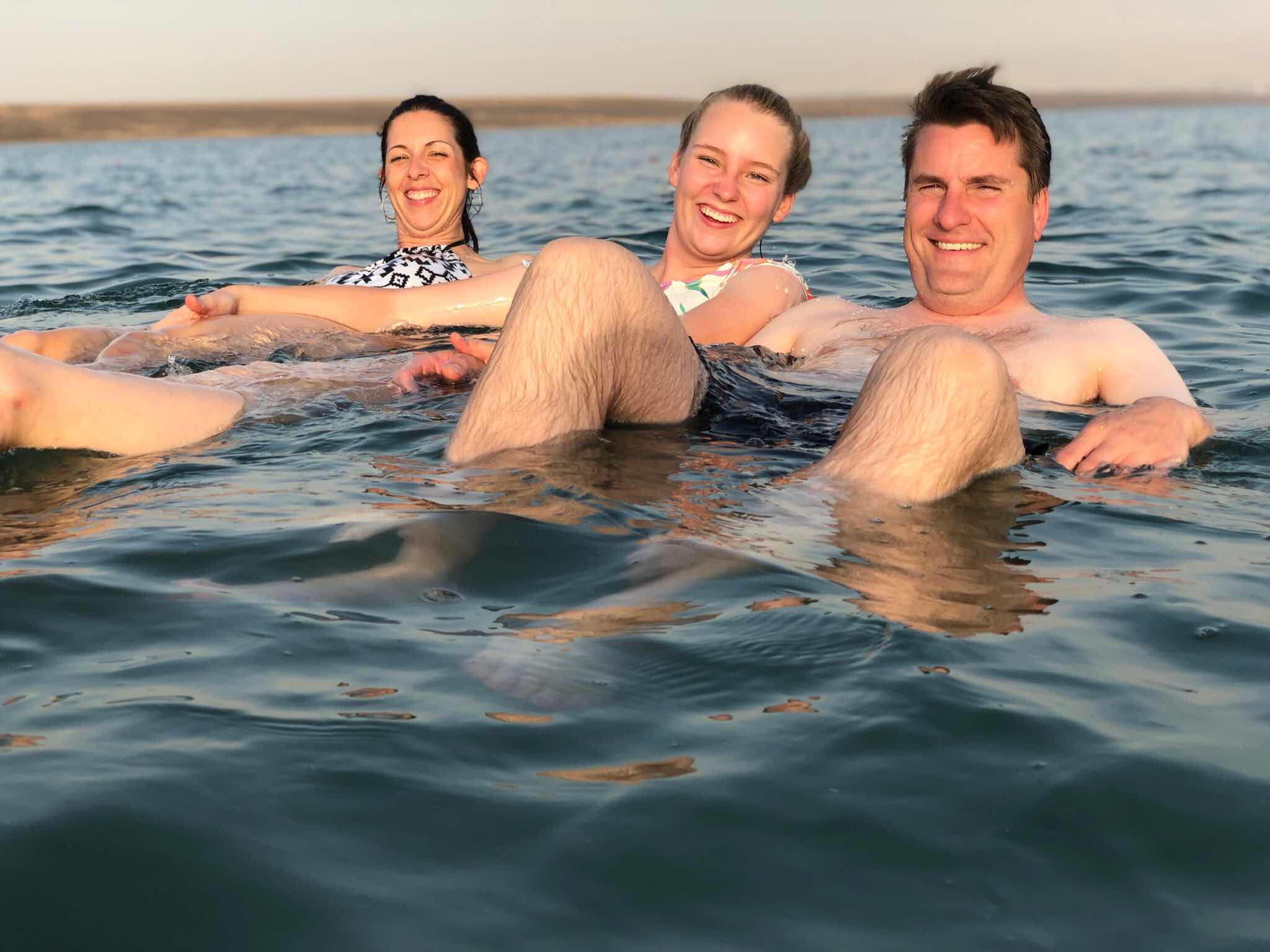 Floating in the Dead Sea (dig the double chins as we can’t stop laughing at the impossibility of completely immersing ourselves). 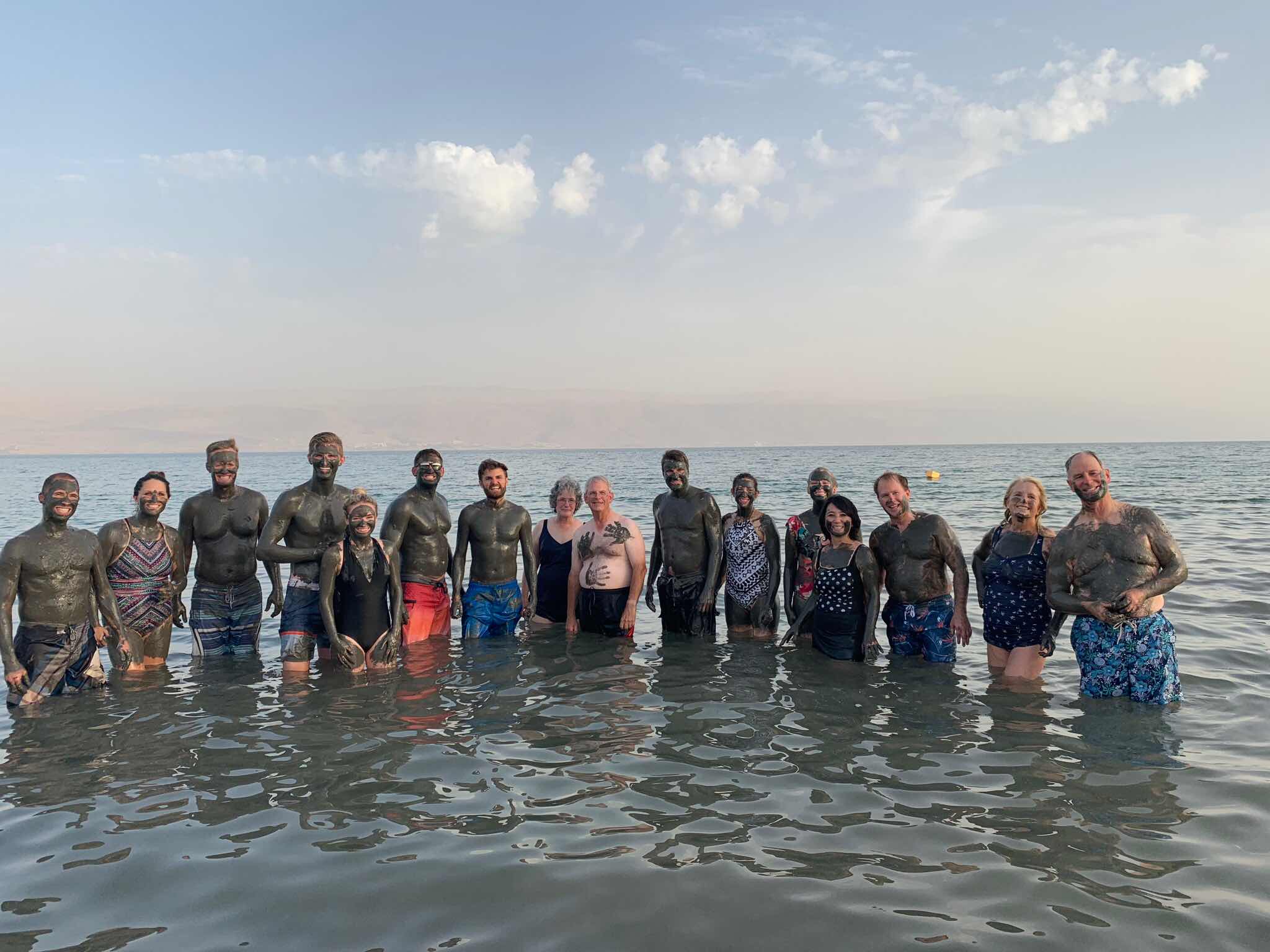 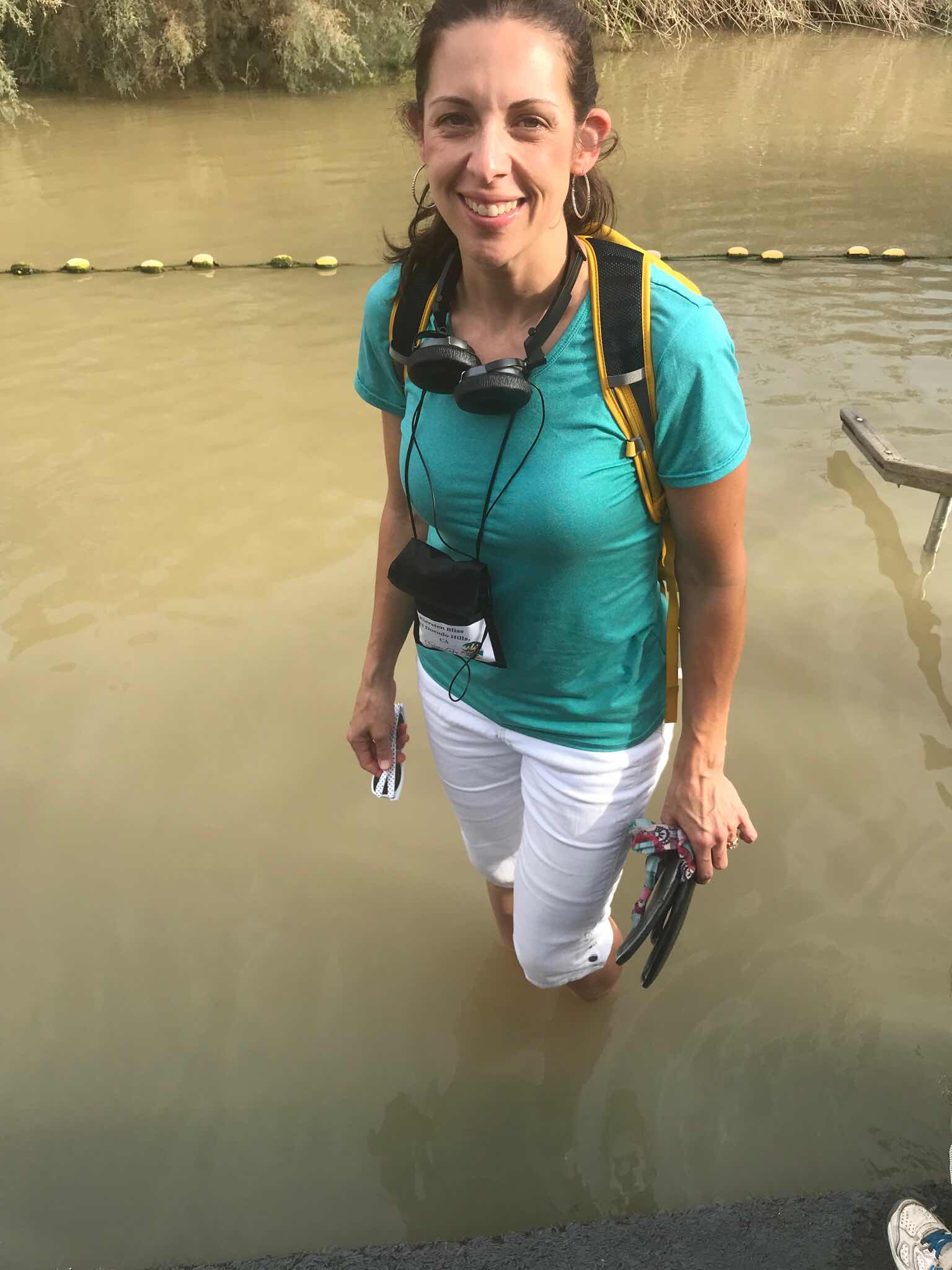 Standing in the River Jordan. The Israel/Jordan border is just about three yards behind me. Both countries had roped off areas with people getting baptized or dipping themselves. Israeli side had “No Crossing the Border” signs and armed military present the whole time. I didn’t see any military presence on the Jordan side.
-Hezekiah’s Tunnel
This was one of the things we did with our extra day. King Hezekiah, King David’s 12th successor, had a tunnel built under the City of David to divert the water from the spring of Gihon to the pool of Siloam. This was to protect their water source from invaders that had already attacked and taken over the northern country. The tunnels are still flowing filled with crisp, cool water—and we sloshed through them!!! It’s pitch black, we used flashlights but would turn them all off from time to time to get the creepy effect, heh, heh, heh. It was definitely the coolest!! 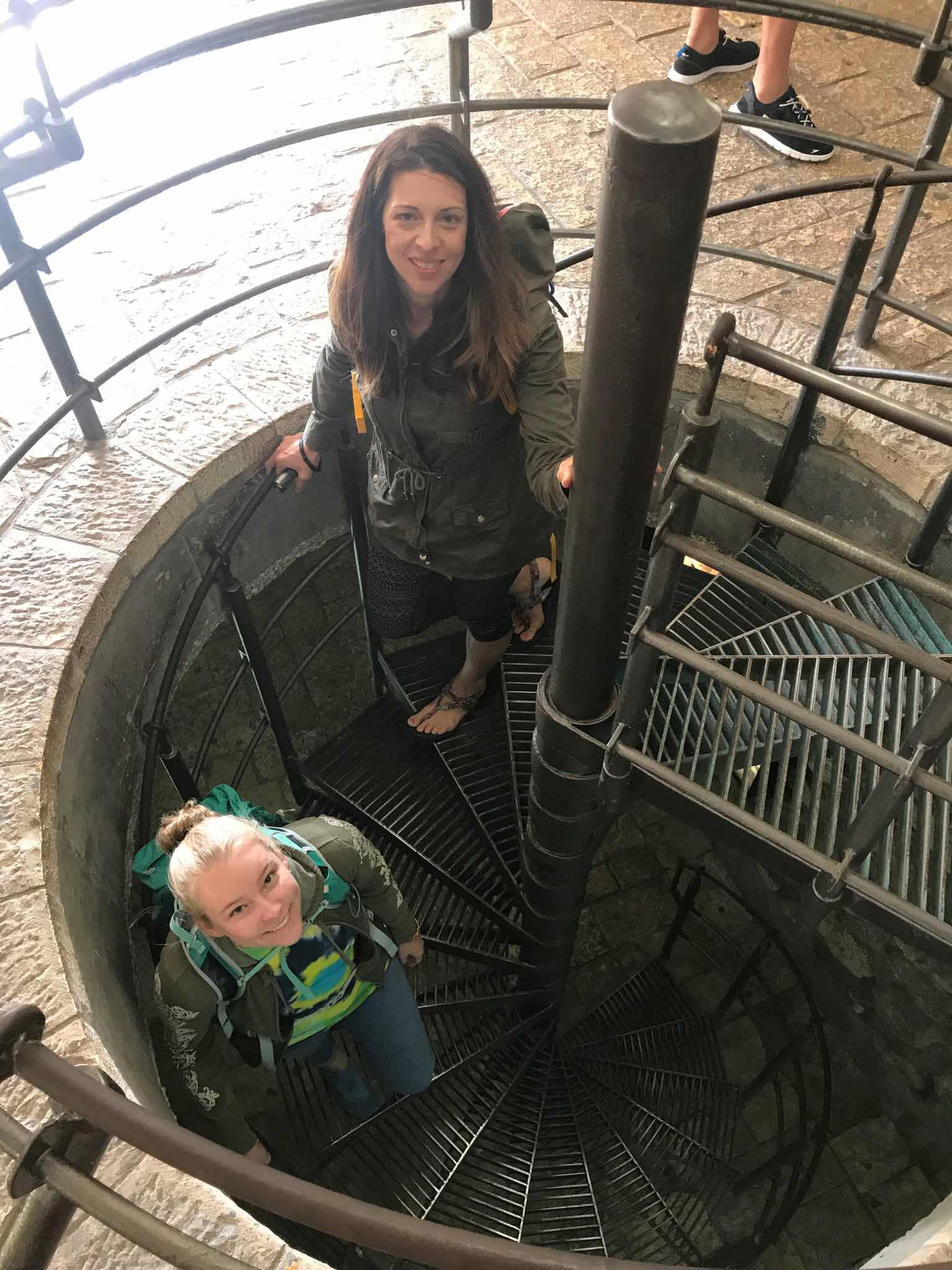 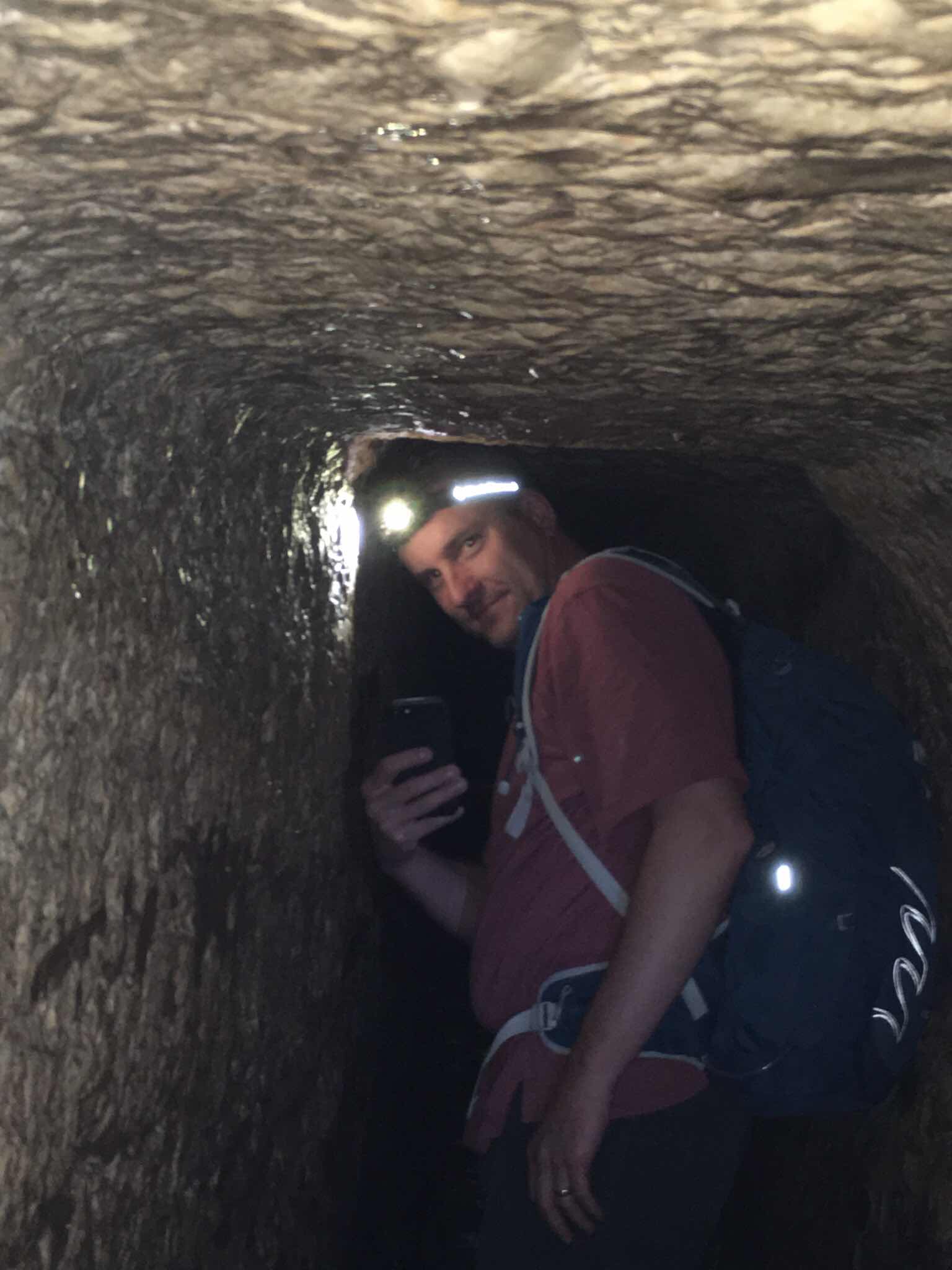 Rarely could we stand all the way up for the 2/3 of a mile slosh. 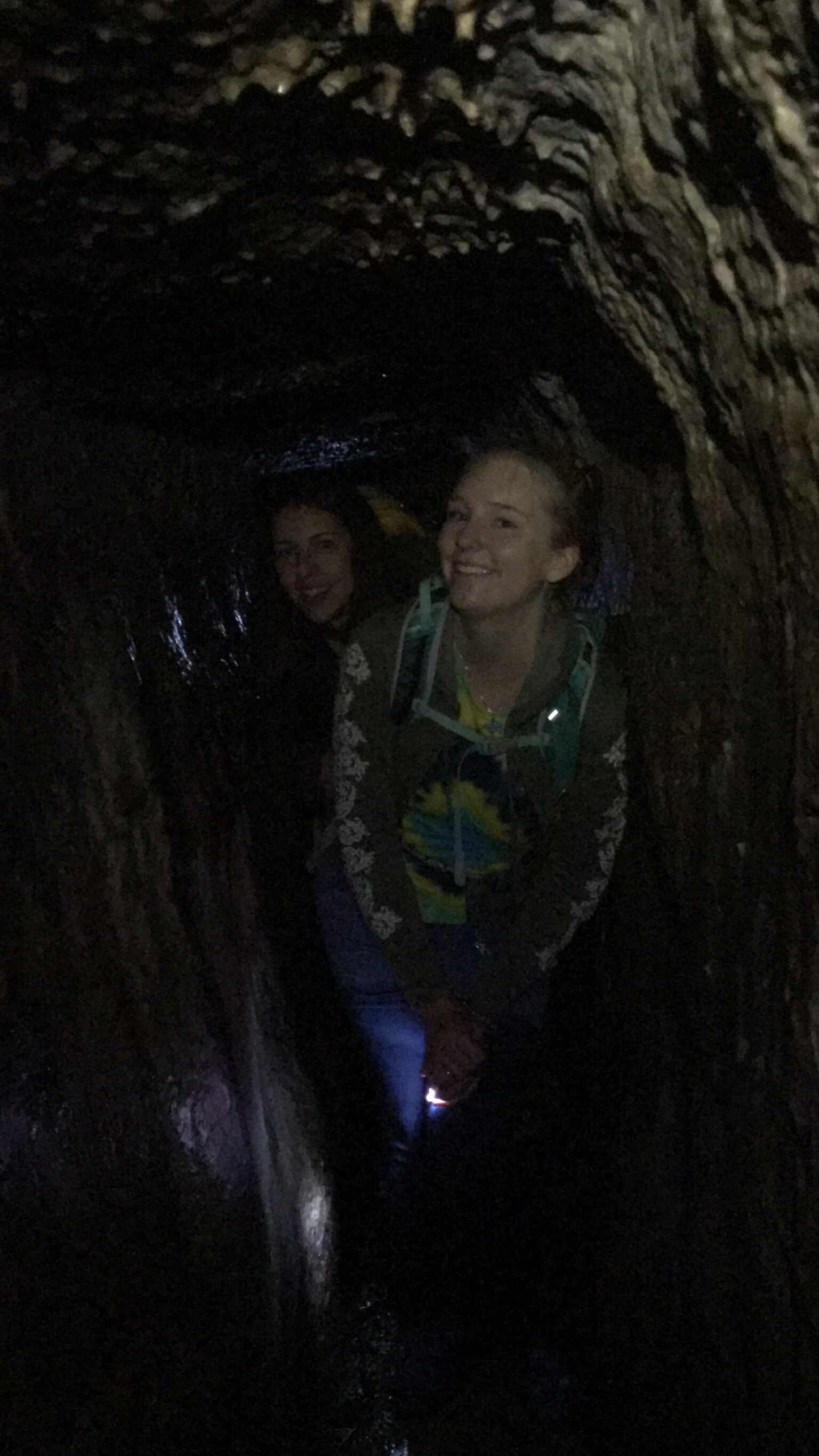 We were in water up to our knees, some times mid-thighs, the whole time. 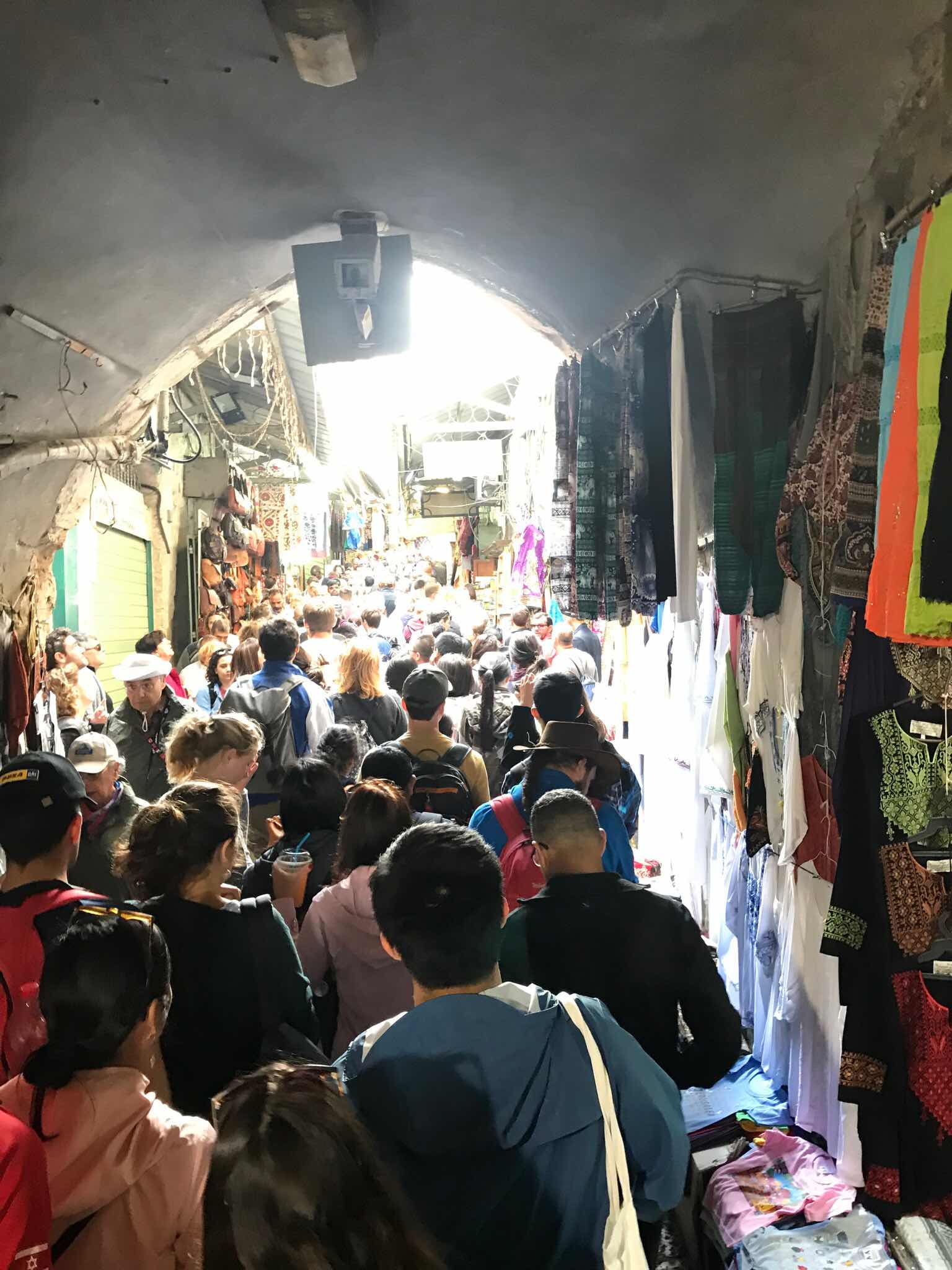 Being stuck in human traffic jams on the crowded streets of the old city. 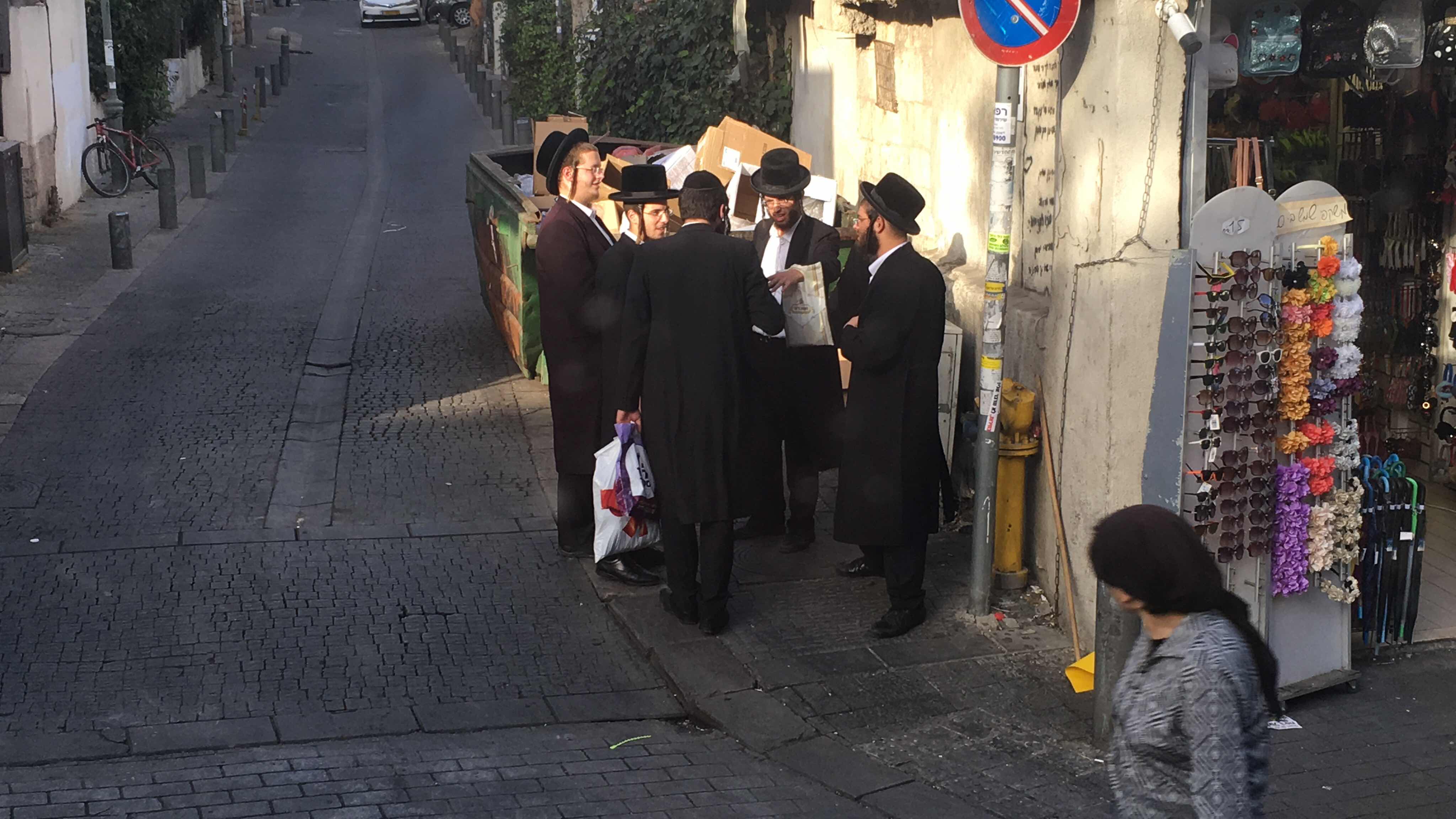 Driving through the Ultra Orthodox Jewish neighborhoods. Seen enough temple curls and women in wigs to last a lifetime...
-Dome of the Rock
My capris were not quite long enough for me to be permitted on the grounds. But some kind Muslim men (ok, they weren’t kind at all, in fact, I thought they were rude and apparently disgusted by my immodest capris!) handed me a long skirt from a basket of skirts, for all the other immodest visitors. Skirt of shame!!! 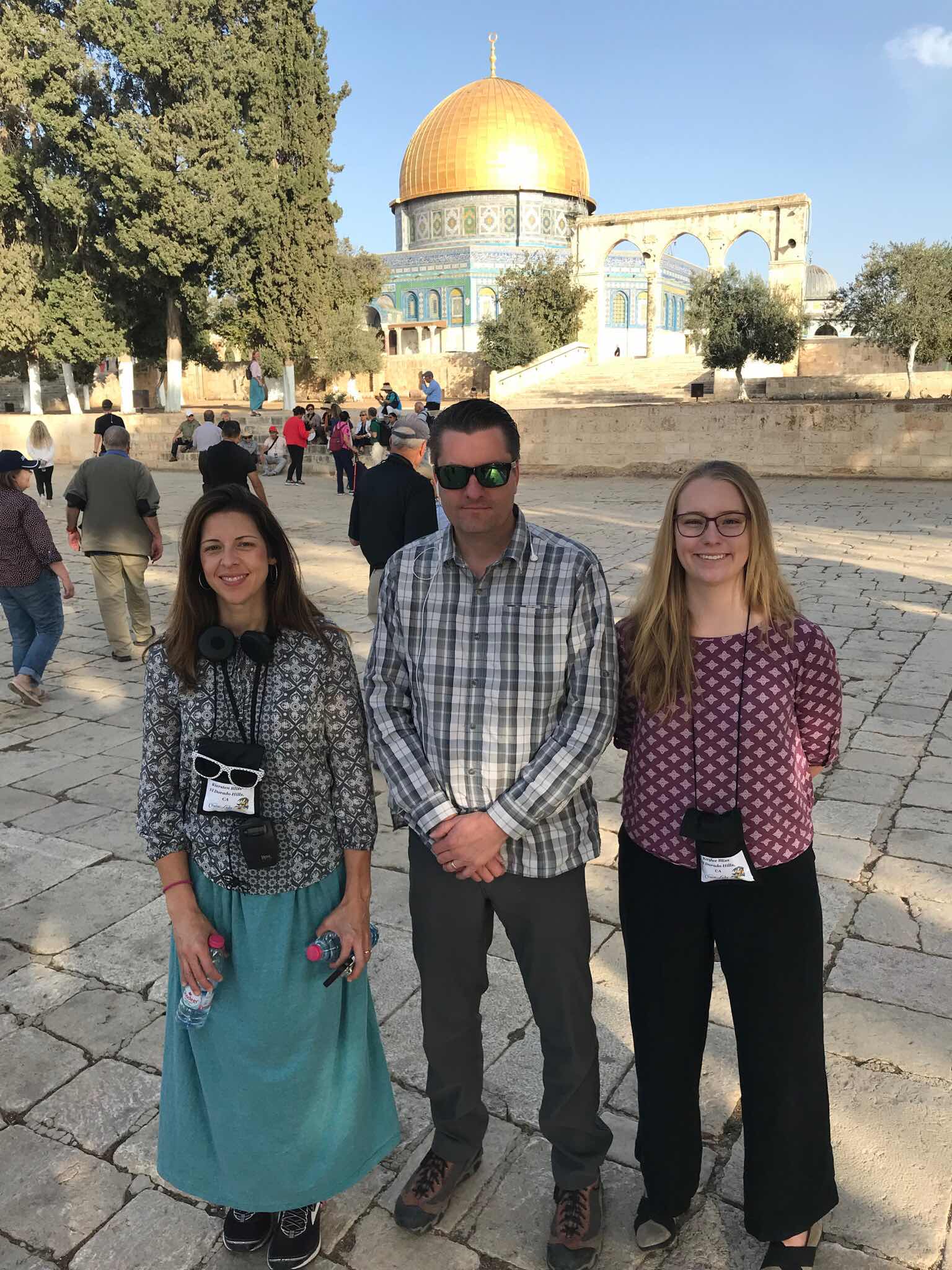 Touching the opposite gender is completely forbidden so I held my water bottles in my hands to help me keep them off my husband. 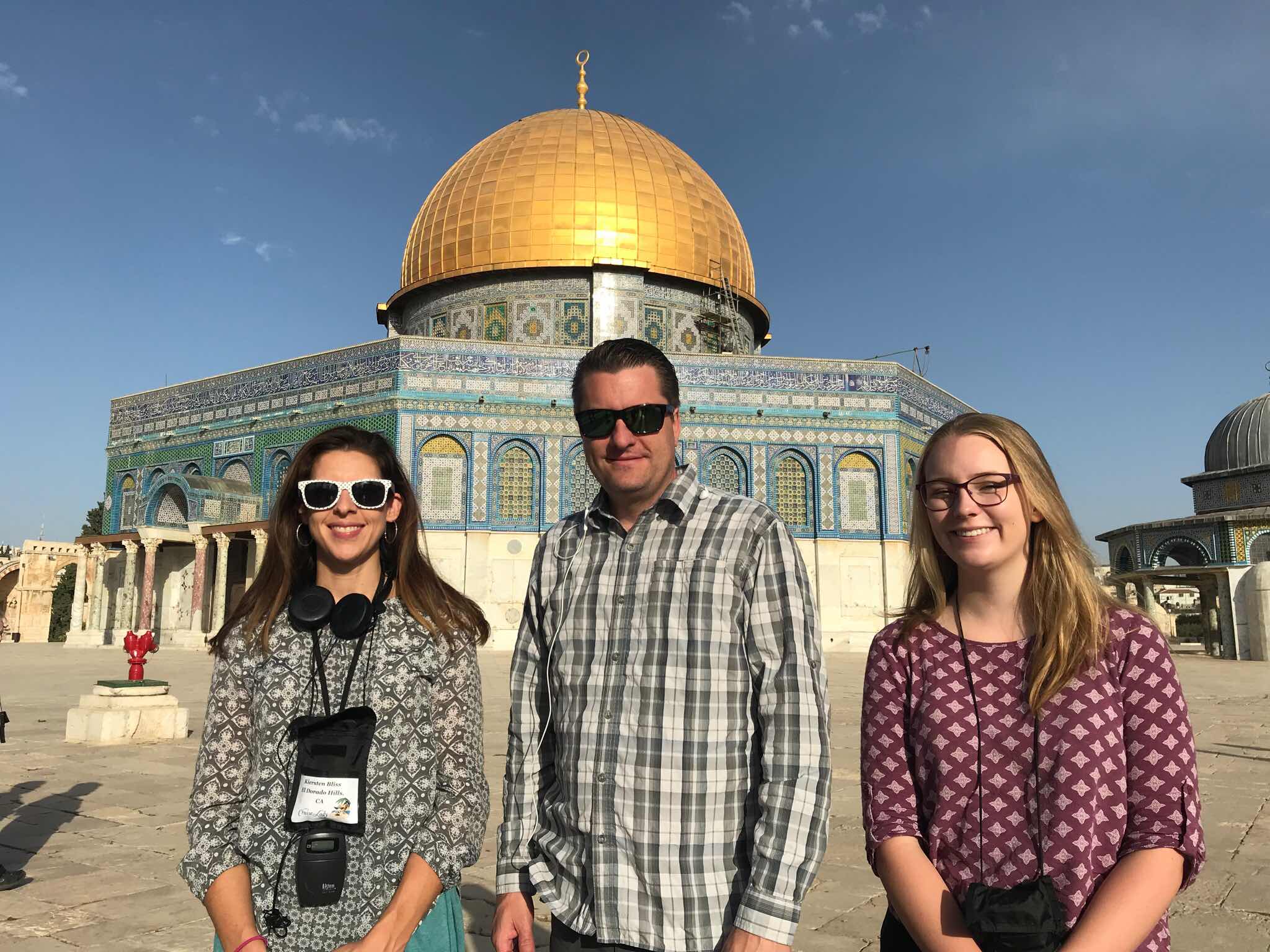 (Continued on next post...)
Posted by SuburbiaMom at 2:02 PM