Are there things that you are doing the exact opposite of what you once did?  Or even just thinking  the opposite of before?  I have noticed some 180 degree changes in my life, on things that are not right or wrong, just different than the way I was before. 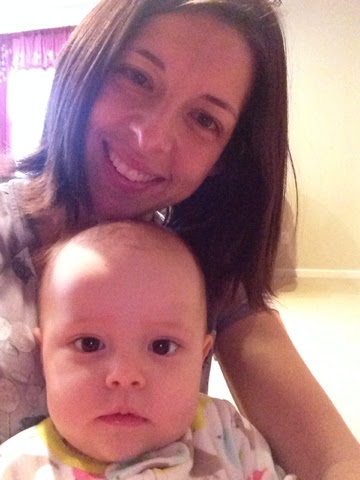 My sister and I use to talk about how deceitful make-up could make you look and how horrible it would be to be an avid make-up user, get married and then for your husband to see you for the first time without make-up and think, "Who in the world are you?!"

I wore make-up in 5th grade, usually putting it on at school when my mom wasn't around.  When she found out she informed me that I couldn't wear make-up until I was 15, which to an 11 year-old seems forever away.  During the following four years I just got used to liking the way I looked au natural and continued to bare my naked face for several years.

It wasn't until after the birth of my 4th child that I started to feel like my face was lacking color.  It just looked mighty pale from losing all the fluids one loses when having a baby, especially at the end of winter when one hasn't been outside much to absorb some sunshine.  I started using some bronzer and felt much better when I saw myself in the mirror.

Since then I would just wear blush occasionally.  A year ago I started to wear foundation, cover-up and blush every day--and I like the way I look with it on, better than without it on.  Some times I even put on eye shadow and mascara and lip gloss.

I never paid much attention to short hair.  Mine had almost always been long.  The few times I had it shorter, it was still to my shoulders, but it was easy to do and easy to pull it up if I needed.  But, then I just got to wanting a change.  I began to consider short hair?  Would I like it--on me?  Only one way to found out.  It's been almost four years since I chopped it off and I love the way I look with short hair.   It's more sassy--and that is definitely more me.  I think I will begin growing it out when I start to get close to 40--just because.  But, I've still got a few years til I attempt that feat!

But, as of the past year, one of my children has required some in-home therapy.  I can't sit by his side 100% of the time, since I have other children and a house to tend to.  So--guess what?!  I am sexist!  I refuse to employ male therapists.  There are some wonderful male therapists out there, but they will never see the inside of my home....

When I was a teenager I knew that I really wanted to get married and, eventually, have children.  I knew that I wanted lots of children.  I also felt that God had given me a special talent and that I would become a phenomenal psychologist one day, or a musician, or an athletic coach....  I saw motherhood as something you just did and didn't think that it would be too hard to manage that while I worked full or part time.

It wasn't until I did get married and then had my first child, while still in college, that my viewpoint began to change.  After spending the first few months with her, and getting close to my graduation, I thought, "How could I NOT stay at home with you?  I don't want someone else to witness all these magical moments of raising you.  I want to see your first steps--not hear about it from the daycare worker!"

I worked part-time for a couple more years, just to help my husband to be able to finish his degree, and then I stayed at home with my babies.  I'm still with them and still loving being the first one to see those smiles, hear those words, and receive those hugs, that only children have!  I plan to work part-time when my youngest begins school full-time.  But for now--I am treasuring this time with my children.

Posted by SuburbiaMom at 8:45 PM