The Saturday before Memorial Day was a six-stake youth dance festival.  That ended up being over 1,100 youth, ages 12-18, from six stakes in the Seattle area.  It was held at the Showare Center (the arena where the Seattle Thunderbirds play).

They began having practices in January and by May dance practices were held in place of all weekly youth activities.  Plus there were Saturday practices.  Youth ages 14 and up were able to participate in couple dances as well.  So, they had even more practices than my daughter.

There's my little beehive--the cute blond on the left!  (Girls ages 12-13 are in a class called beehives).

Dance Festival began with the dark arena.  Then a light as the north doors/curtains were opened and youth came running in waving flags.  It was an amazing sight to see all these bright, noble young people pouring in and filling up the dance floor.  There were so many of them--the Spirit hit me hard as I beheld them all.  I thought of this scripture: 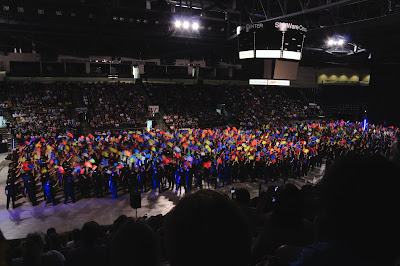 I felt like all those feet were there to bringeth good tidings.  You could tell those youth were happy to be there and excited to share their testimonies of the love the have and feel from Heavenly Father.  I just can't find words to describe being there!

There were several dances, but I only have pictures of the Chinese Fan Dance.  The other dances were (let's see if my brain can remember): cha-cha, hula, country western, russian, tininkling (sp?), JaiHo/indian, polka, swing, hip-hop, some New Zealand warrior one, and I'm probably forgetting the rest :).


Those youth worked so hard and it payed off!  You can actually view several of the dances here:

She looks beautiful and the fan dance looks neat.

They haven't done anything like that here in no. California but my when we were back in Virginia over Christmas my nephew was starting to practice for their dance festival.

Makes me teary just reading your description of the kids running in. It was amazing!

It really was amazing! I got emotional watching all those kids running in and filling the room. I never expected to feel the spirit in a situation like that. I'm so glad our youth got to have such a neat experience. They did a great job!