Things I Could Live Without, but Thankfully, I Don't Have To!

Finally!  I will begin posting about, well, things that I could live without, but thankfully, I don't have to!

Less is more for me, especially in my kitchen.  I like having tools that can do many different things, that have several functions.  My husband and I saw a device, at a store the other day, that is used for shelling and deveining shrimp.  Yup, that's it.  Things like that don't wind up in my kitchen (c'mon people--isn't that what hands are for?!)

For years I have been rinsing my vegetables and fruits in a colander.  See, I could use the same colander for draining pastas.  Making salads, in a hurry, were hard to do; the lettuce just wasn't draining all the way, so in order to really make a good salad I was either starting it a few hours beforehand so that the lettuce could drain enough or do lots of blotting with paper towels right before preparing the salad.

Costco had the Kitchenaid salad spinner a year or two ago, for super cheap, so I bought one.  Salad spinners have been around for years, but again, I thought of them as things that just take up wasted space. 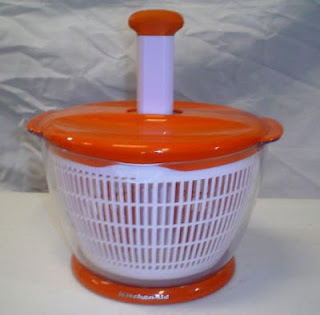 The one I have (see above) is not the best kind out there, but for now, it's doing its job and I am happily making salads in very little prep time--YES!!!!﻿
Posted by SuburbiaMom at 10:05 AM

Katie has one of these and I'm always telling myself I'll get one. I need more tools like this!

I need one of those. If you want a second use you could use it as a pasta drainer. :)

I had felt the same way as you for the longest time, until the previous tenant in San Diego forgot to pack their salad spinner. I used it because it was new and the rental agency told me to just through it away. Then I was hooked. I still have that very salad spinner, and love it! What do you put in your salad?

Oh, what doesn't get put in a salad!? We have so many kinds, Marie'! Maybe I'll post a couple of my faves and you can do the same....