P is for Pain in the Patella

No, I don't have any literal pain in my knee (thank goodness). Just a general pain, an annoyance....

The dynamics of a family--everyone moving in different directions at different speeds. It sure can get crazy. To prevent future headaches in your homes, please read the following true story:

Once upon a time a little boy turned 5. The night before his birthday his mother was driving around frantically in the dark trying to find the nearest Toys 'R' Us. (She had waited til the last minute because 1) She couldn't very well take her son with her to the store during the day--he'd see his gift and 2) Due to a ridiculous amount of unexpected snow for the area, many roads had been closed prior, due to severe flooding). She knew exactly what she needed: a remote control car, more specifically, a replacement for the one that the little boy had received at Christmas, the same car which his sister had thrown down the stairs and destroyed. He had wept over its loss for many hours. Mapquest had missed one little detail in the directions and the poor woman was nearly rear-ended while realizing that a road she was on suddenly turned sharply into a freeway on-ramp. When she finally got to her destination (after many, many turn-arounds) it was 2 minutes to store-closing.

The unable-to-tell-time Toys 'R' Us employees had already locked the doors and had the nerve to pretend not to notice the woman pacing and tapping at the doors. (Oh yes, they saw her!) The woman drove home feeling horrendously frustrated and upset. She was even crying so much that she had to pull over the car at one point to "have it out." Calling her husband made her feel a little better; he was happy that she hadn't been killed. After saying their "goodbyes" she sucked it up and drove home (surprisingly without having to turn around at all--stupid Mapquest).

The woman and her husband decided that even though he was pulling long hours working at his new job, the next day he would have to leave early to go to the Toys 'R' Us near his place of employment. He would have to get that car before cake and ice cream time. He did get that car, as well as a few other things. Unfortunately, for those who don't like long stories, this one doesn't end here.

Those few other things have been giving the woman a headache for the last couple of weeks. When a toy's packaging has the words "ages 6-16" it should be taken seriously. The man, though, sincere in his efforts, had no idea that his casual overlooking of these words would prove to be a nightmare for his beloved wife.

First, some things to be aware of: 1) The woman stays at home and is therefore around the little boy about 10-11 hours more than the man. 2) The boy is awake during this entire time and, being a child, does tend to play with toys during most of this awake period. 3) And like any kid, the boy was bound to ask for someone, let's say the woman who's around him most, to "help" him put his new "ages 6-16" toy together.

The instruction manual was 25 pages long. And it had an annoying fold right down the middle that kept the manual from laying flat. There were 61 parts, 20 of which were moving parts, and 13 of which were smaller than 1/2". The woman extracted every brain cell that remained after carrying and birthing 4 children, and somehow managed to build what the boy affectionately named, "Dude."

Dude looked tough, with his spinner shooters and light-up cranium and ability to roll up into an orange wrecking ball. Dude had an even smaller dude, also rolled up like a ball, that he could shoot out of his chest. Little dude even had little dude guns. Dude was the Dude of Dudes. 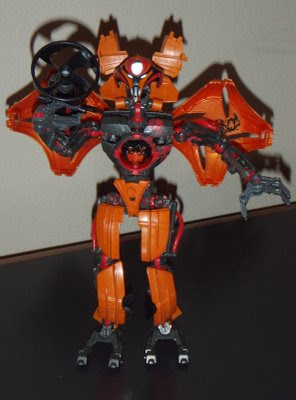 Unfortunately for Dude, and the woman, it is hard for 5-year-olds to play with "ages 6-16" toys. Just because you can be rolled up into a cool, rolling boulder of destruction doesn't mean that a 5-year old can roll you up without making parts of you come off. And, this particular 5-year-old boy happened to be quite good with putting things together, just not as good as a 16-year-old (or even a 10 year old). I mean for crying out loud, he just learned to tie his shoes--and now this?!? What happened to something transitional, like a perfectly harmless Transformer?

Poor Dude, spending several hours of each day as an amputee. Poor 5-year-old boy, unable to mend his beloved, suffering toy. Each effort seemed to leave Dude in worse condition than before. Poor woman, unable to get any household chores done, seemed to be constantly rebuilding Dude.

In exasperation she said to the 5-year-old two days ago. "This toy is recommended for older kids, I don't think Daddy knew that it would be such a frustrating thing for you [and me]." She even made a side comment about maybe putting it away for a while until the boy was older. Usually the boy would have loudly protested to words like that. But he didn't. He got a thoughtful look on his face and just walked away.

Yesterday the boy approached his mother as she was checking her email. He handed her a pen and paper and asked her to write a note. "Dear Dad," he began. "I kind of like the big toy you gave me, but I'm putting it somewhere safe. It keeps on breaking. So, when I'm bigger, I'm going to play with it. Love, ______." The sweet child had thought about it for a day and even considered how the man would feel about him not wanting to play with the toy he'd been given.

So, Dude is now put away for a time, with all parts intact. The woman is now free to do her homemaking duties. The little boy has managed to be happy with just the memory of Dude. And, hopefully the man has seen the error of his good-intended ways.

May you be blessed with wisdom in your toy selections.
Posted by SuburbiaMom at 7:51 PM

What a hilarious story and how sweet of little five year old to write such a nice note for his daddy. You are so funny. I hope you catch up quickly on all your homemaking duties.

I have definitely felt your pain on this one. That story sounds so familiar!

I greatly sympathize with the woman. Battery operated toys were banned from our toy selection for the same reason. The woman in our house hates changing batteries, and the noise the toy makes.

Dude looks very cool. Maybe in a couple years he can be a great friend to your boy.

i totally relate with your story...you need to publish it! jerod landed and broke josh's very fragile helicopter christmas day, even though i told him over and over that the grass would be better than concrete to land it.
they never listen....

So how fares the RC car?

The car is fine, probably what keeps the 5-year-old boy from suffering greatly from the memory of Dude.

Wow. What a story. And what a telling--I visualized it very well throughout. Definitely "one for the books." I'm glad he was so understanding about Dude, and I love that he wrote a note!

Great Story. I can't believe boy is already five. WOW. I love that he wanted to write a note to his dad.